Sixteenth century women were a thrifty lot, and who could blame them.  Fabric and clothing were incredibly expensive.  According to The Tudor Tailor,

“a day’s wage for a labourer would buy a yard of the cheapest cloth (canvas at 4d a yard) while his wages for six months would barely buy a yard of the dearest cloth …… and a fine cloak, at £20 would require more than three years labour.”

Neither Linen, used mainly for shifts and shirts nor good woollen cloth came cheap.  Imported fabrics like silk in colours produced by expensive dyes could only be afforded by the most wealthy. That’s why “my wearing apparel” features so often as number one item in wills of this period.  The clothes they wore were, for many people, the most valuable thing they owned.  One of the reasons we have so few items of clothing surviving form the sixteenth century to help us understand how they were made is that so many were handed down, re-purposed and re-used.

Recycling clothes was common even amongst noble families, as detailed in The Lisle Letters, the correspondence of Lady Lisle, (a distant connection of the Gilbert family from  my novel A Woman of Noble Wit).

So even women from the higher strata of Tudor and Elizabethan society were keen to make their clothes serve them well, while at the same time wanting to keep up with the latest fashion.

Costly gowns had to last throughout the wearers life, accommodating any changes in body shape. Laces could be let out to allow for expanding  waistlines, 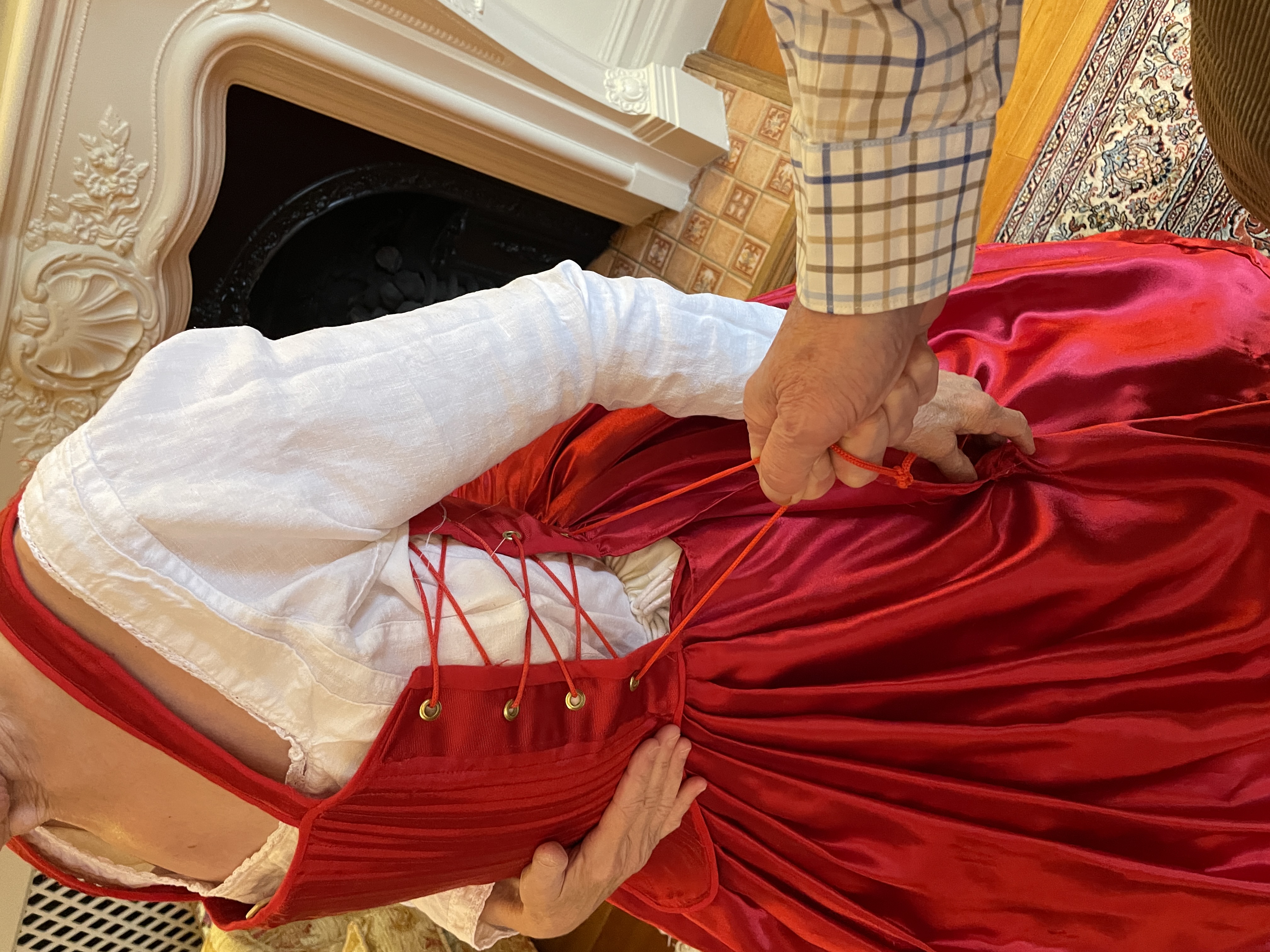 either due to overindulgence or pregnancy.  For front lacing gowns the gap was concealed beneath an additional piece of fabric called a placard or stomacher which was opinned in place.

Keepers - strips of added fabric at the hem - could lengthen a gown for a growing teenager and were also used to protect the fabric from wear and tear. Even underwear was designed to last with 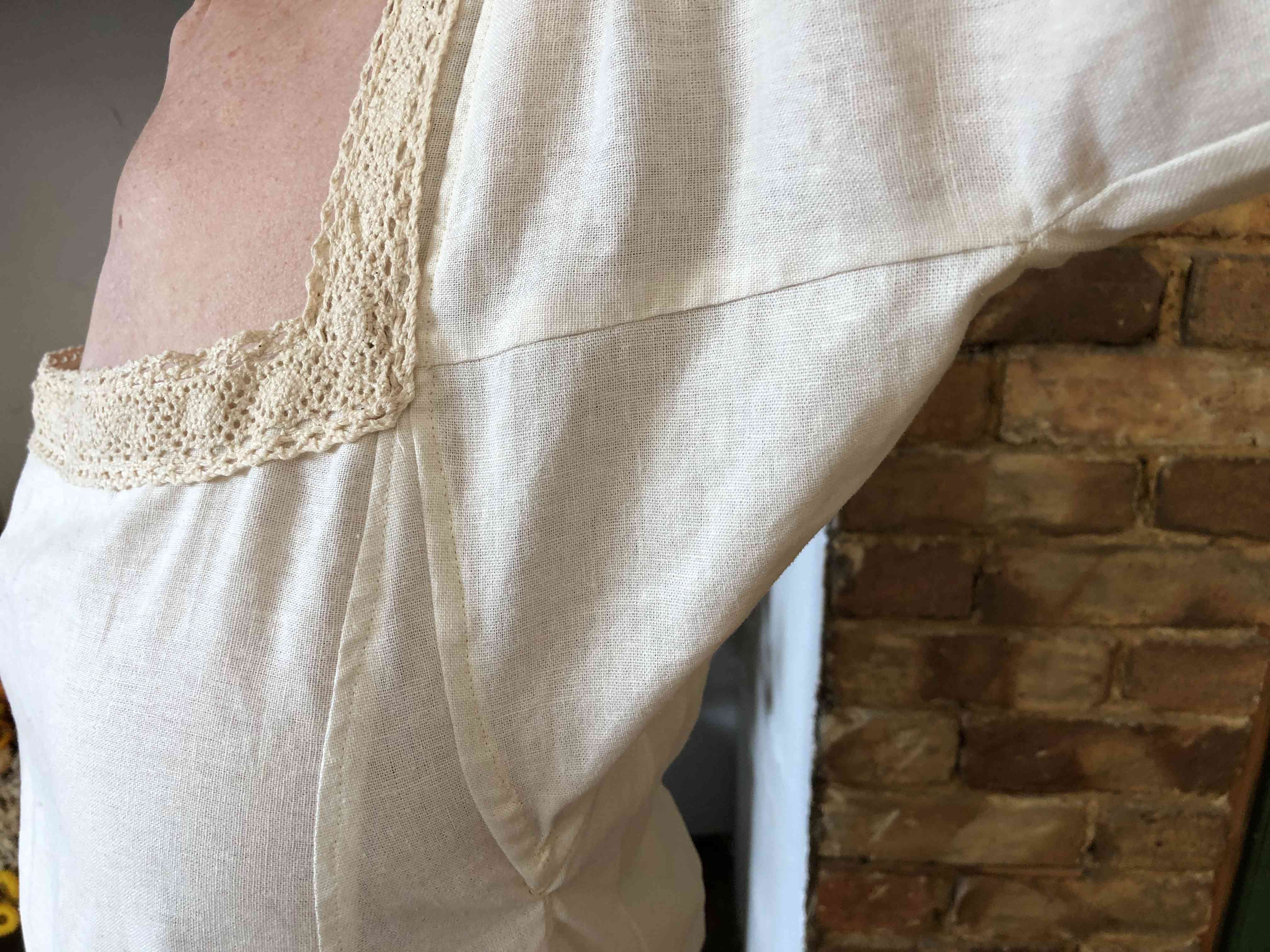 shifts featuring underarm gussets that could easily be snipped out and replaced when soiled.

Outfits could be refreshed and brought up to date with the latest fashions by adding interchangeable smaller items of clothing. Sleeves and cuffs, 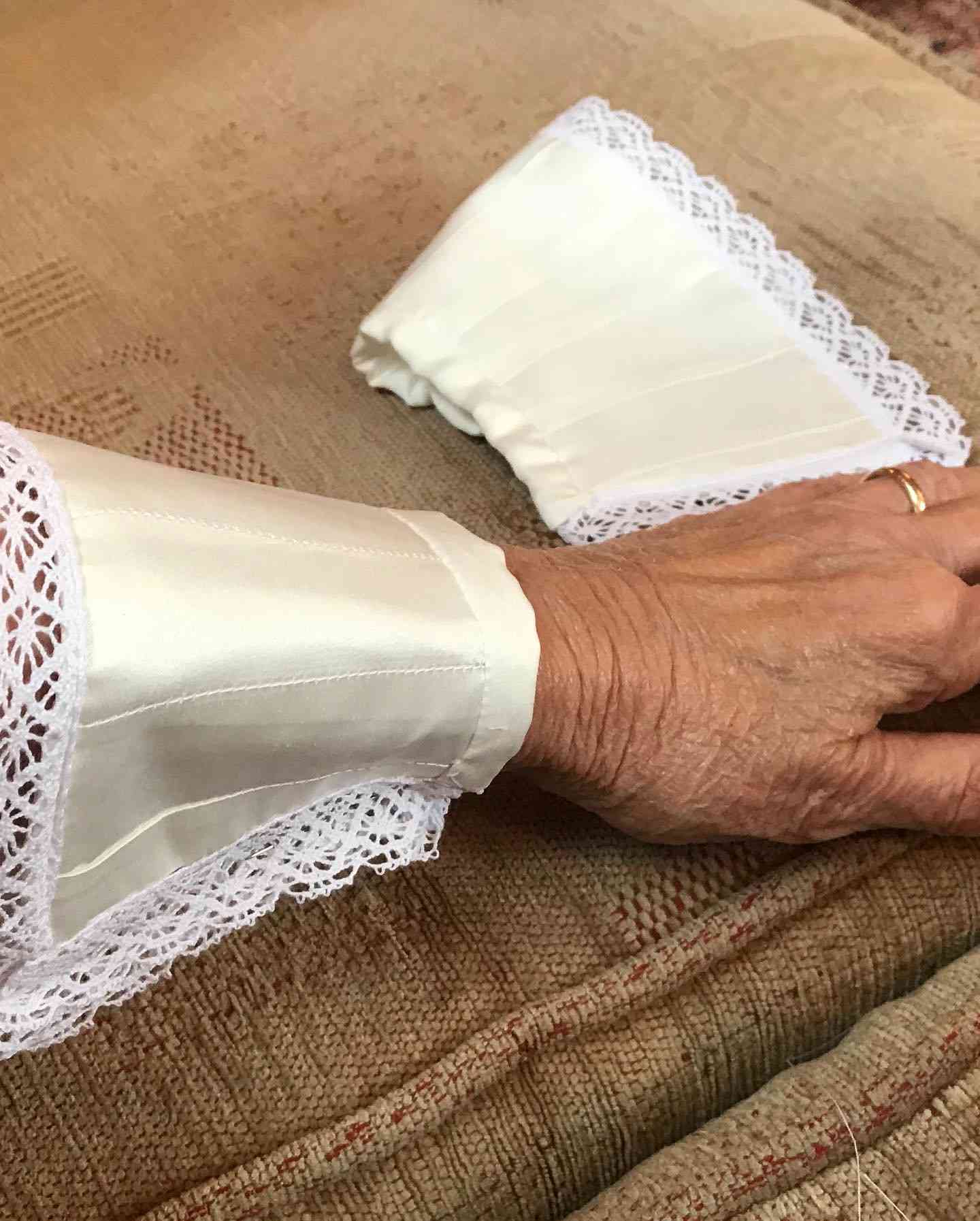 collars and ruffs used smaller amounts of expensive fabric to good effect. Mix and match was very much the order of the day.

A partlet was another small item that could add a lot to the well-to-do sixteenth century woman’s latest look. It covered just the neck and shoulders, and could be worn over the gown, or inside to fill the neckline.

Partlets first appeared in the late 15th century, perhaps an elaboration on a simple kerchief or scarf tied or arranged around the neck.  They featured in both men's and women’s Burgundian dress, and were used to fill in the rather low necklines in fashion at the time. Men continued to wear partlets, often made from rich materials, as a separate loose collar to be worn with low cut doublets.

For women the addition of a partlet  added warmth and also filled the “modesty gap” between the neck and the top edge of the gown or kirtle. Covering the neck was a sign of propriety after marriage, particularly amongst the middling and lower classes, though unmarried  upper class women, including Queen Elizabeth herself, are recorded as “having their bosoms uncovered.” 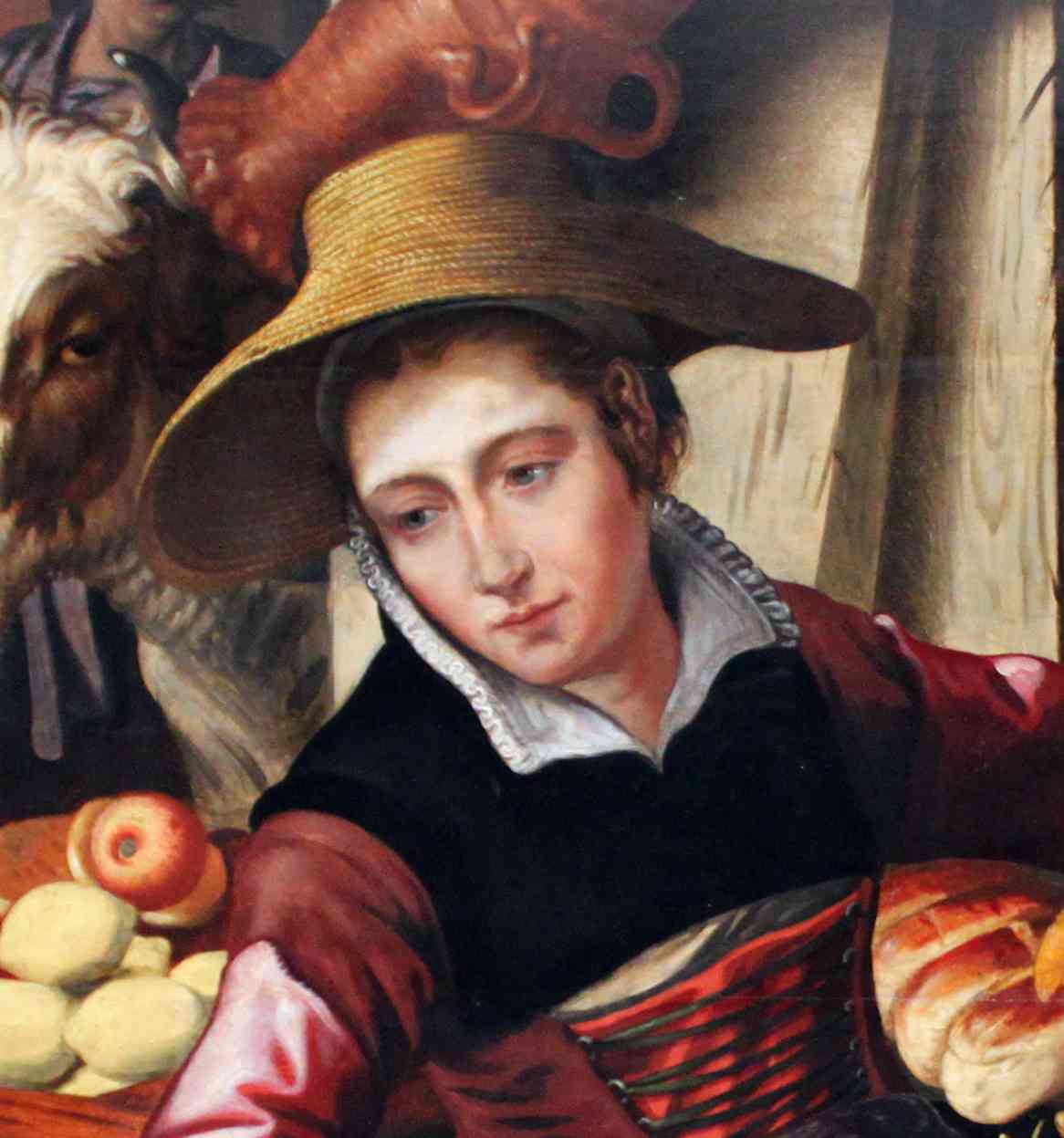 ngs show peasants and market women wearing partlets like this one, worn on top of the kirtle and tied beneath the arms. They are often dark coloured or black, and probably of quite heavy woollen cloth for warmth.

For the wealthy a range of materials including silk and velvet were used.  Fur linings might also be added for extra warmth

Later in the century partlets were more often worn inside to fill the gap at the top of a low cut gown, often made of much finer materials, such as silk or fine linen.  These later partlets were often made to match a pair of sleeves. 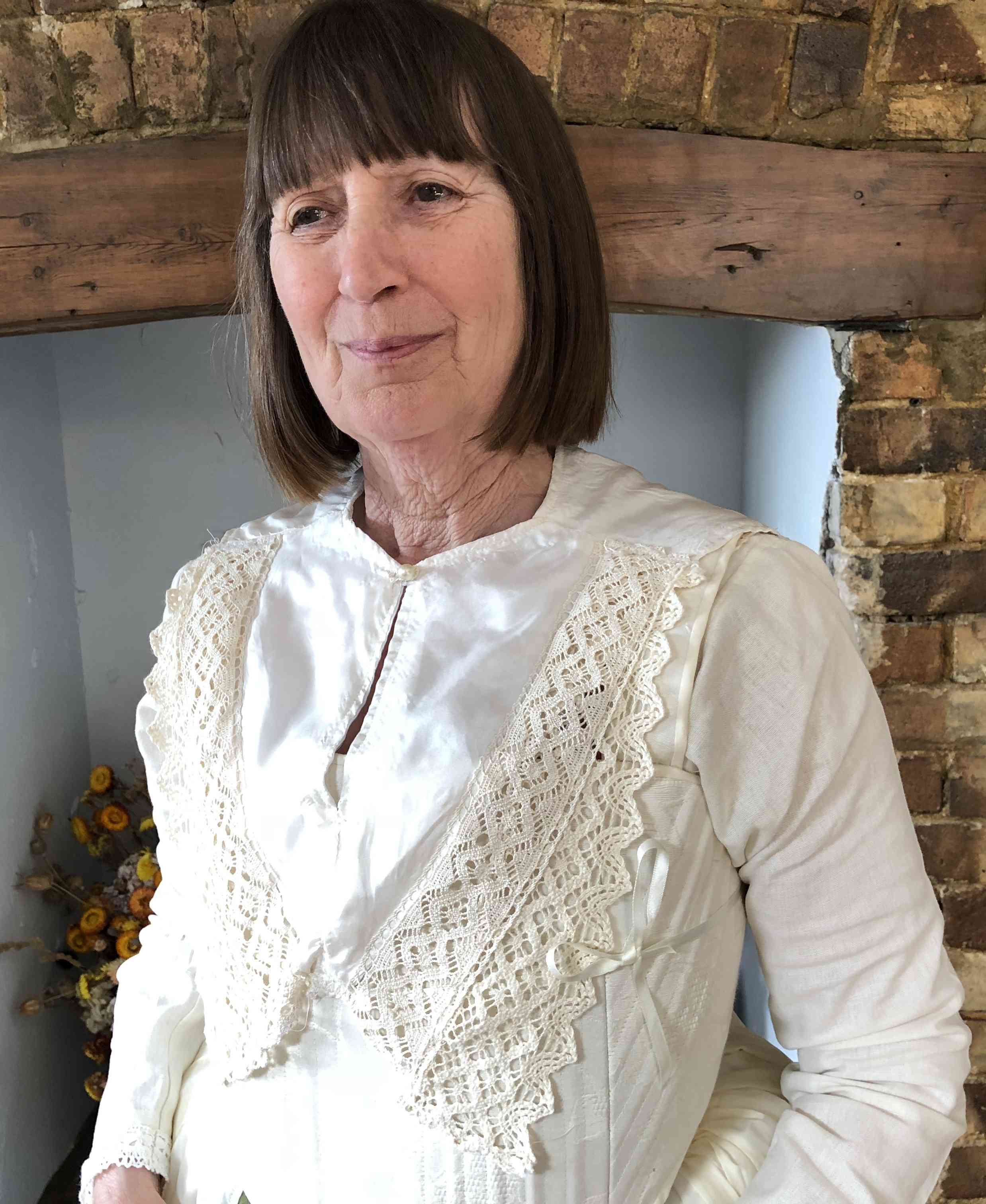 Versions made from lighter materials were fastened under the chin with silk ties or hooks and eyes.  Blackwork embroidery was often added particualry to decorate stand up or frilled collars.

In the case of the Queen, as well as blackwork, gold threads were added to the embroidery, and the partlet might be decorated with gold and silver braid with pearls and other Jewels often on the neckband.

“To David Smith Embrauderer …..for embrauderinge of a very rich partelet upon silver sarceonet with cheynes of gold and great pearles …………and new setting on of the Jewels in the band. 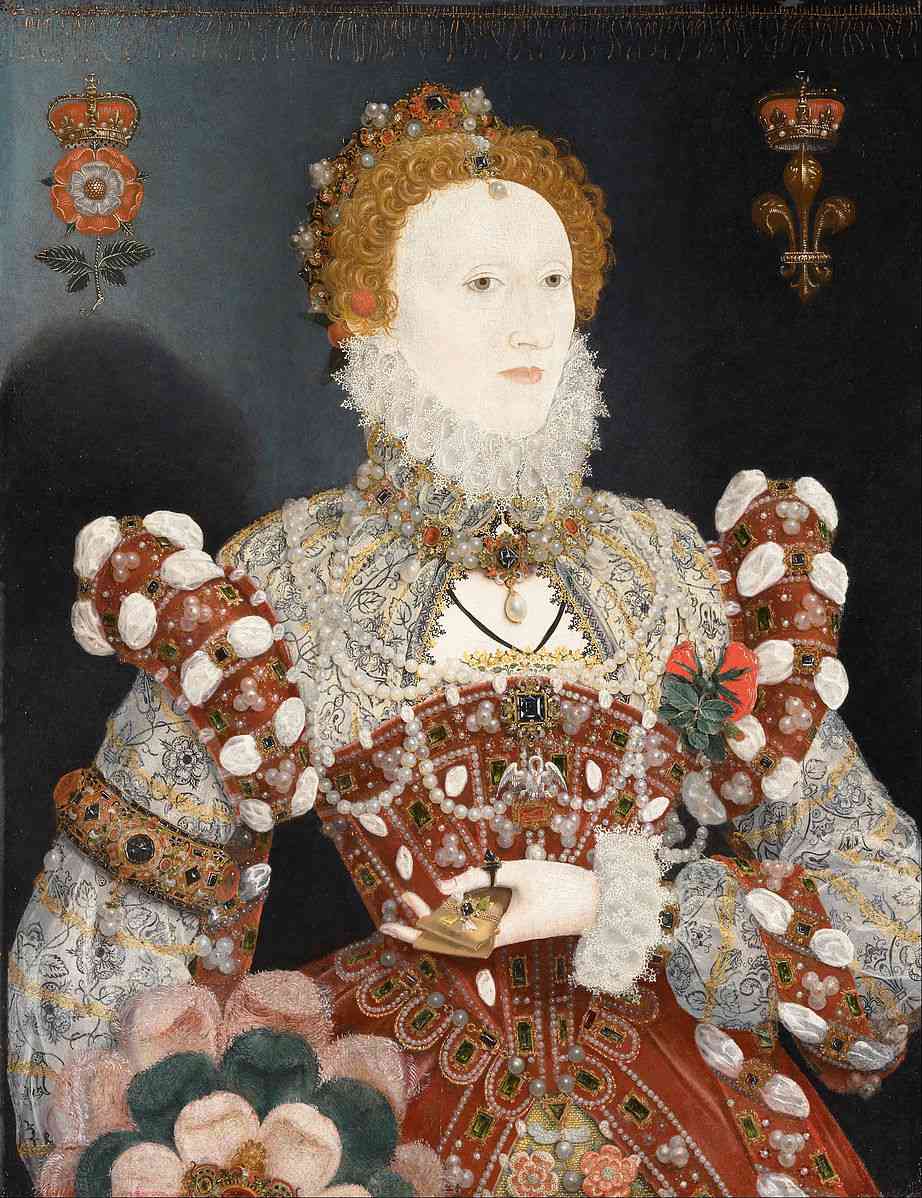 Ruffle collars attached to partlets gradually increased in size and became elaborate ruffs, which might be worn separately.

It’s sometimes said that the name “partlet” comes from the medieval French use of “pert” or of “Dame Partlet” to mean a hen, the connection presumably  being  the ruffling of feathers at the neck.  But as the term partlet was in use well before the fashion for ruffs, this theory does not seem to fit.

Although they seem relatively simple to construct I’ve actually found this one of the most challenging parts of my sixteenth century costumes to get right.  I think its probably because I’m quite small that I find it hard to judge the exact size I need,  and to anchor it well with underarm ties. I find this one rides up and bunches a bit at the back when worn beneath my red gown 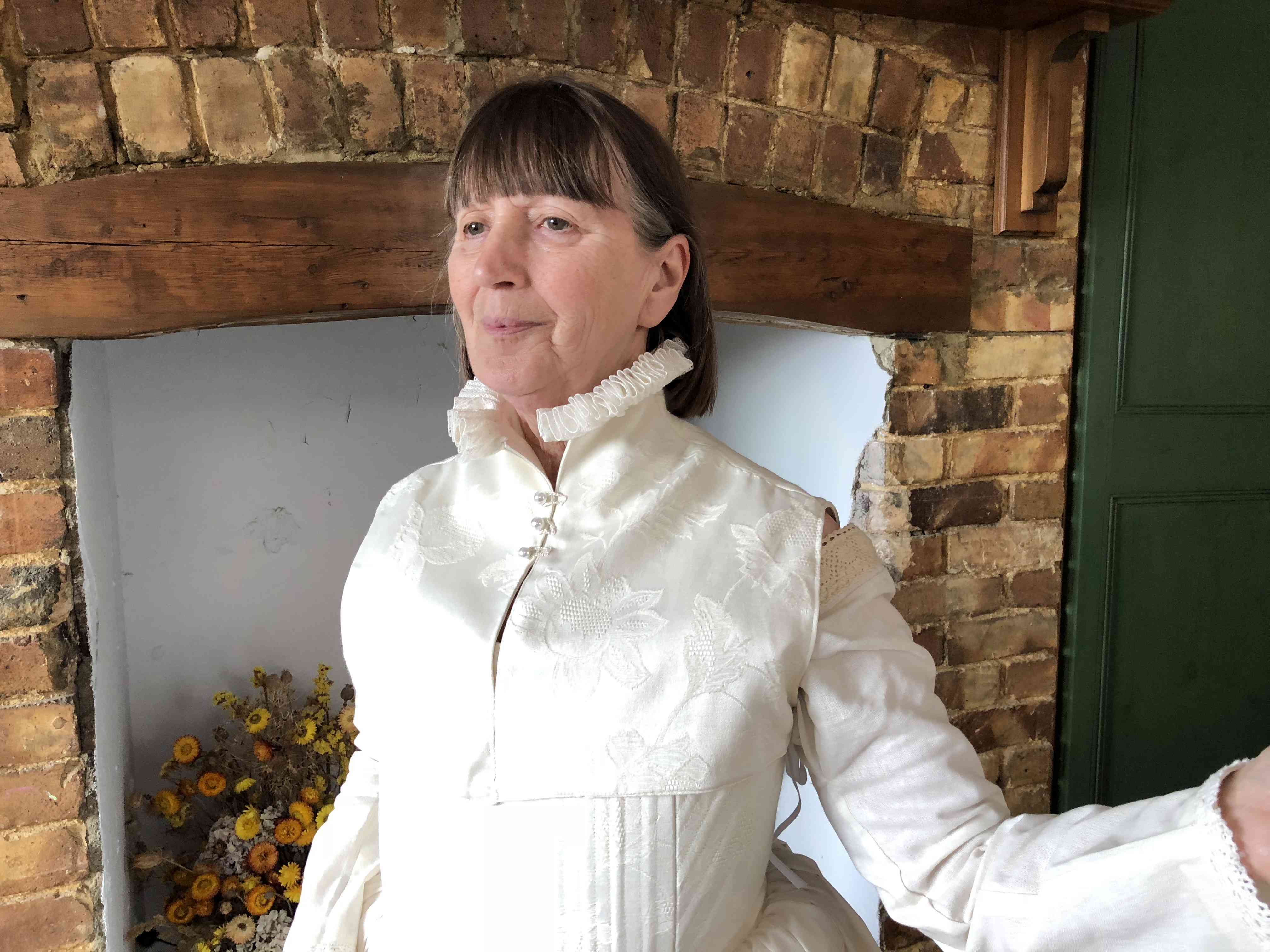 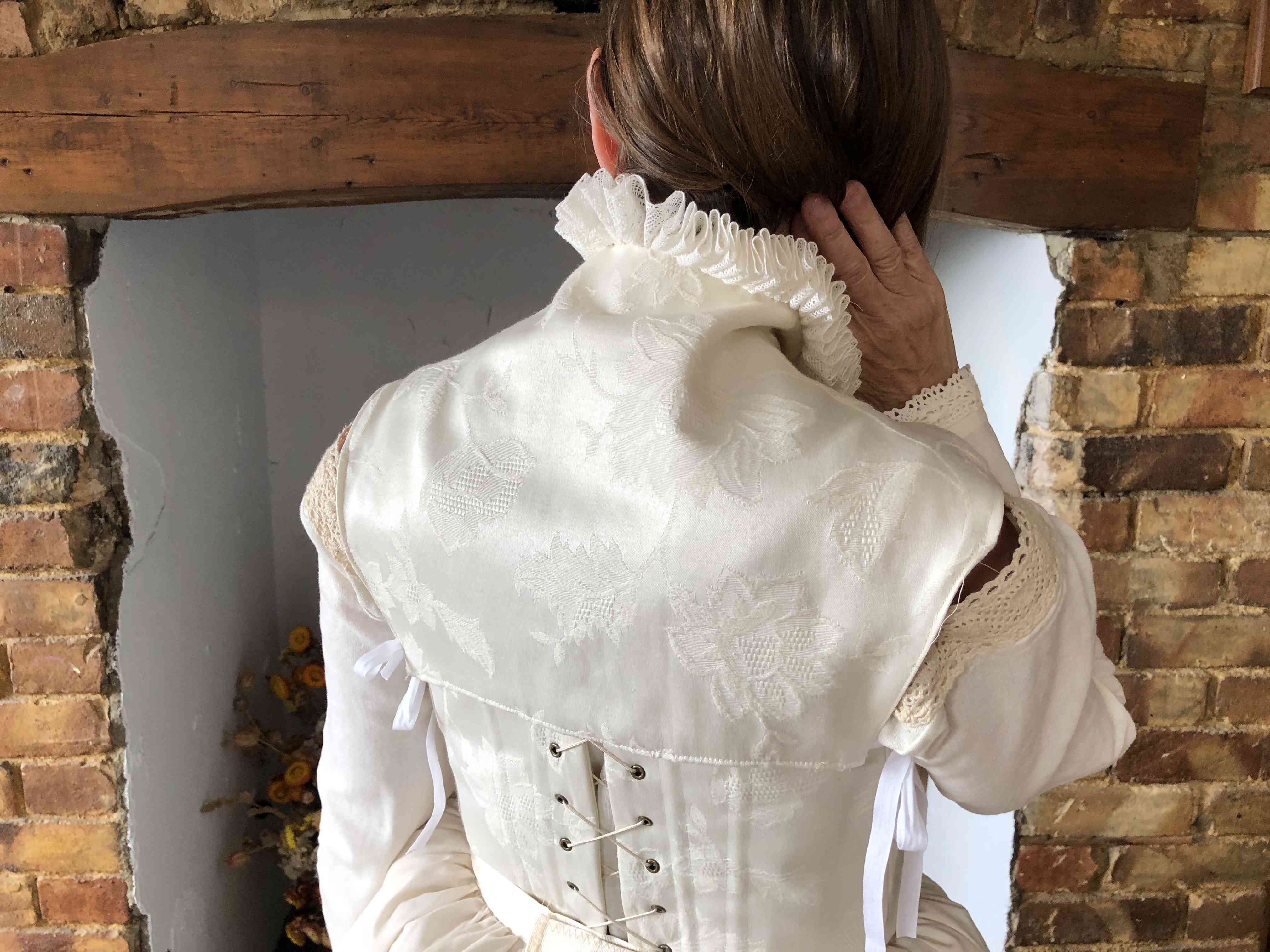 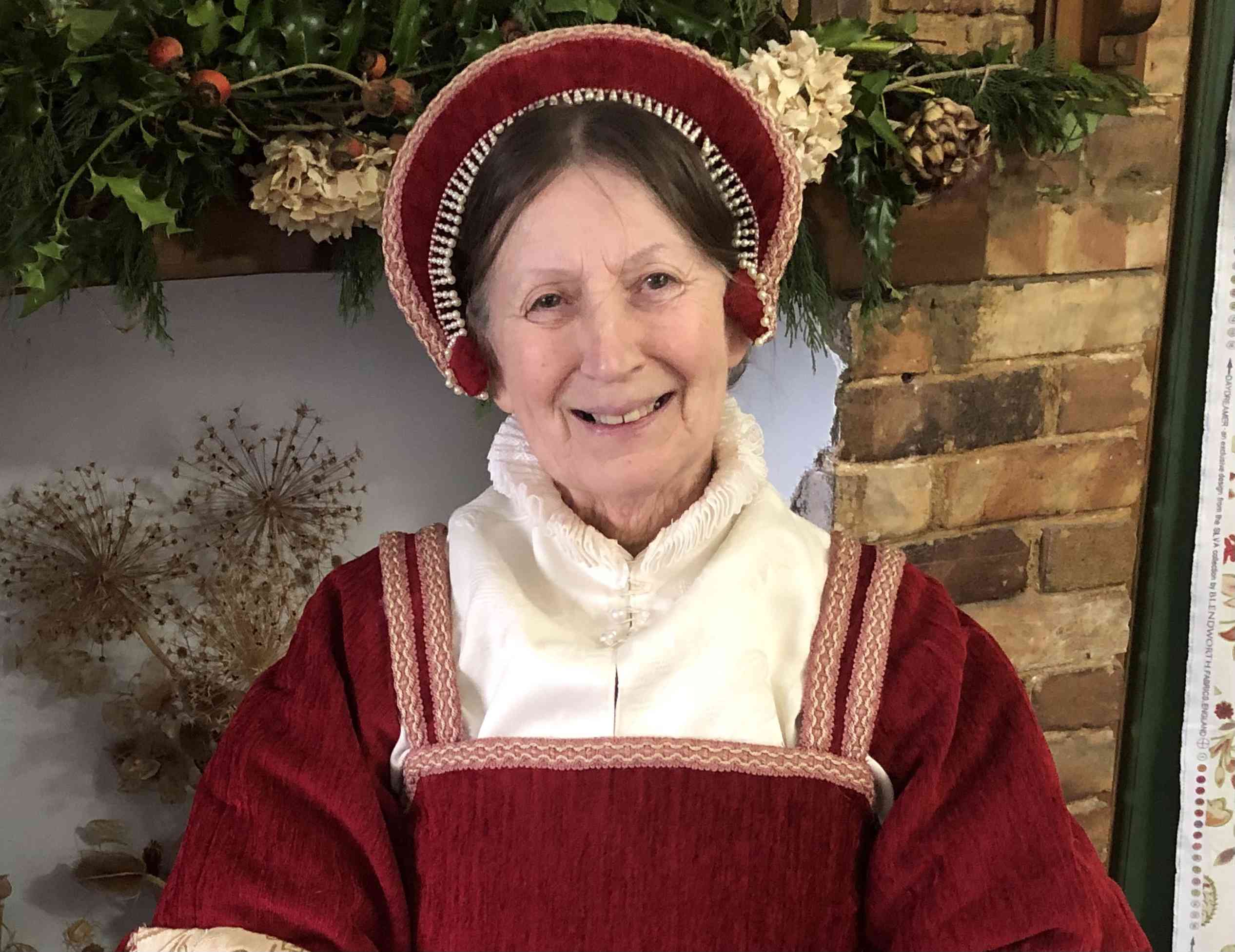 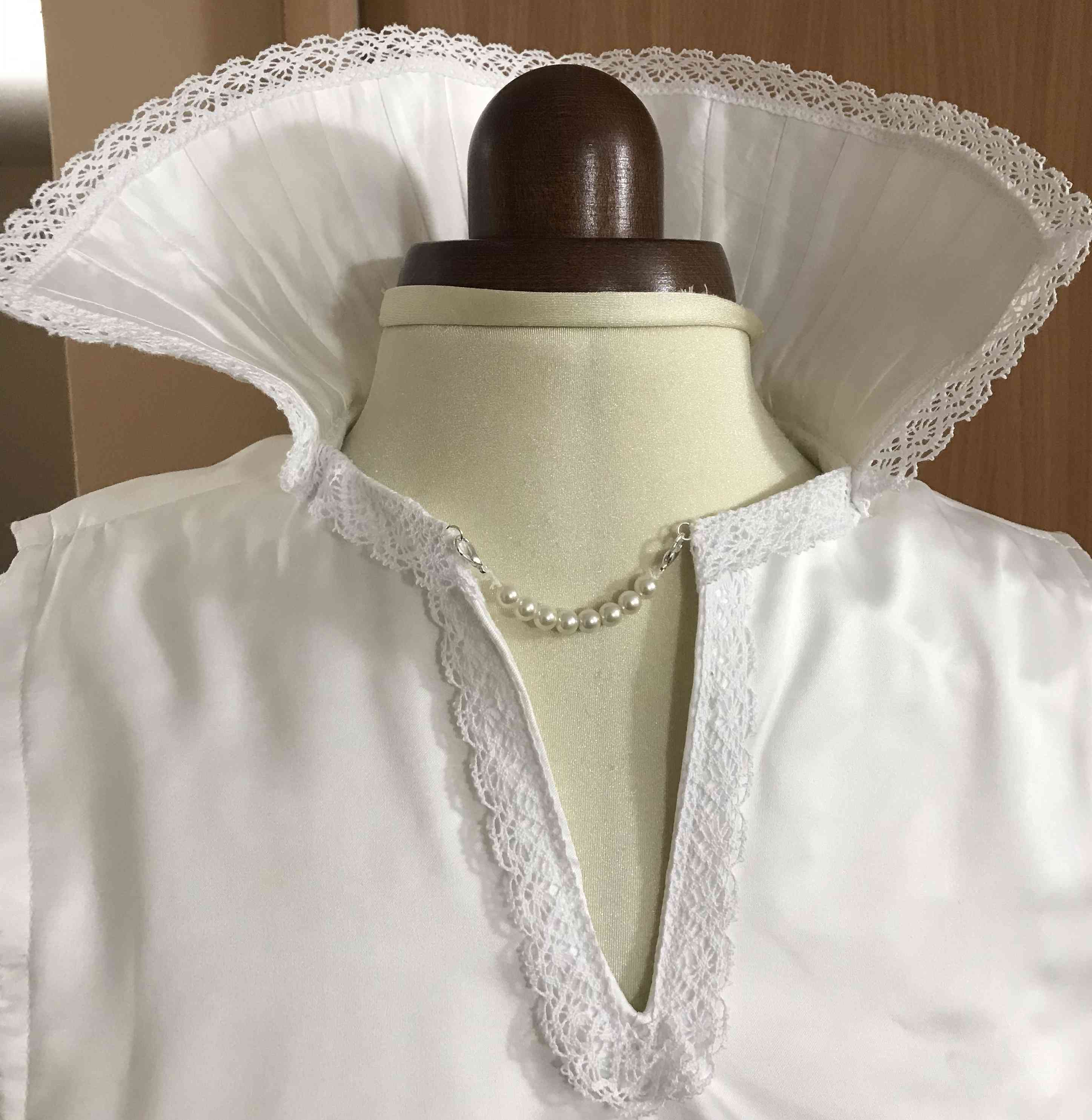 This silk partlet has a high stiffened collar attahced.

I’m trying a different style and construction method in my latest project. 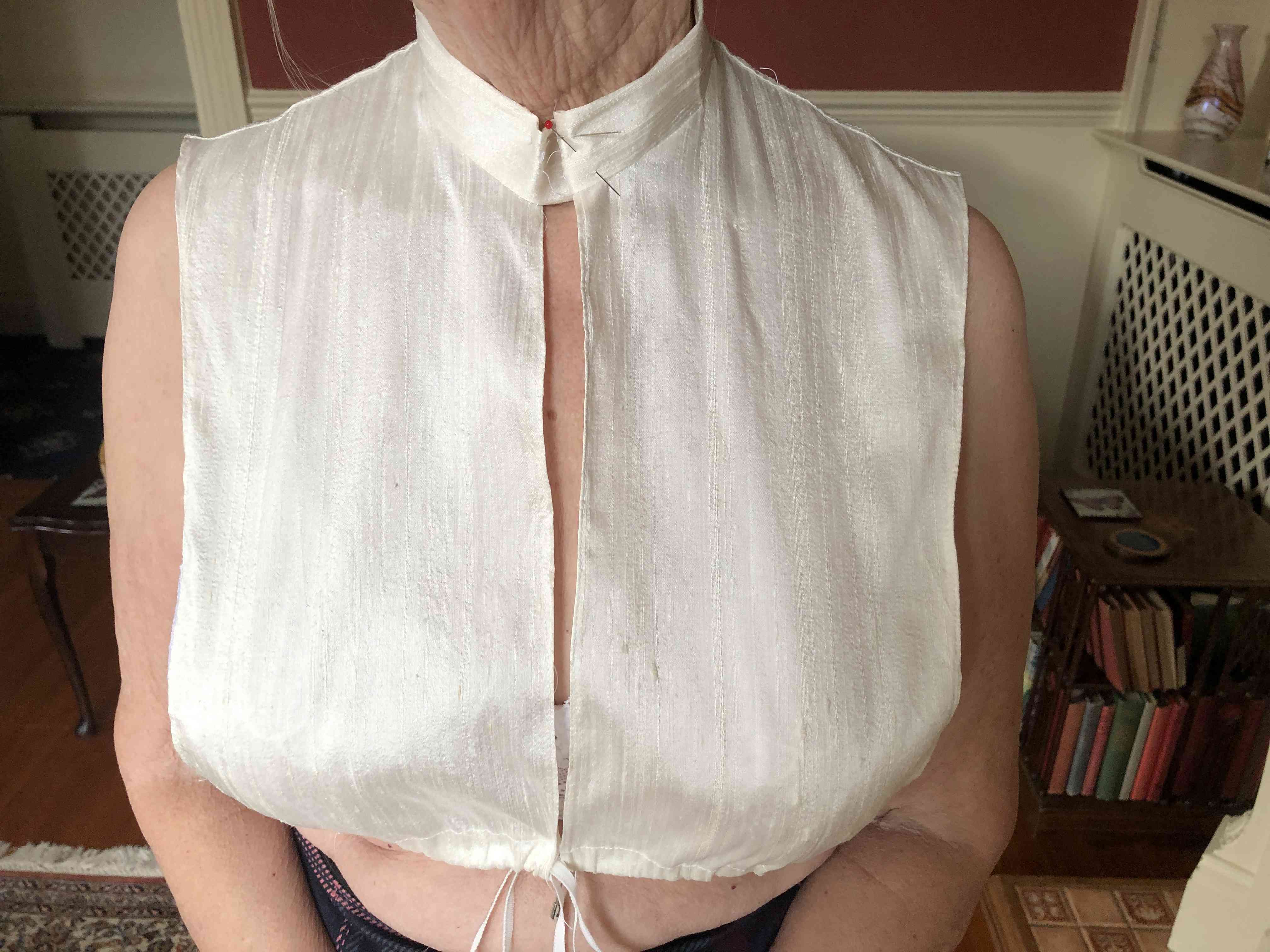 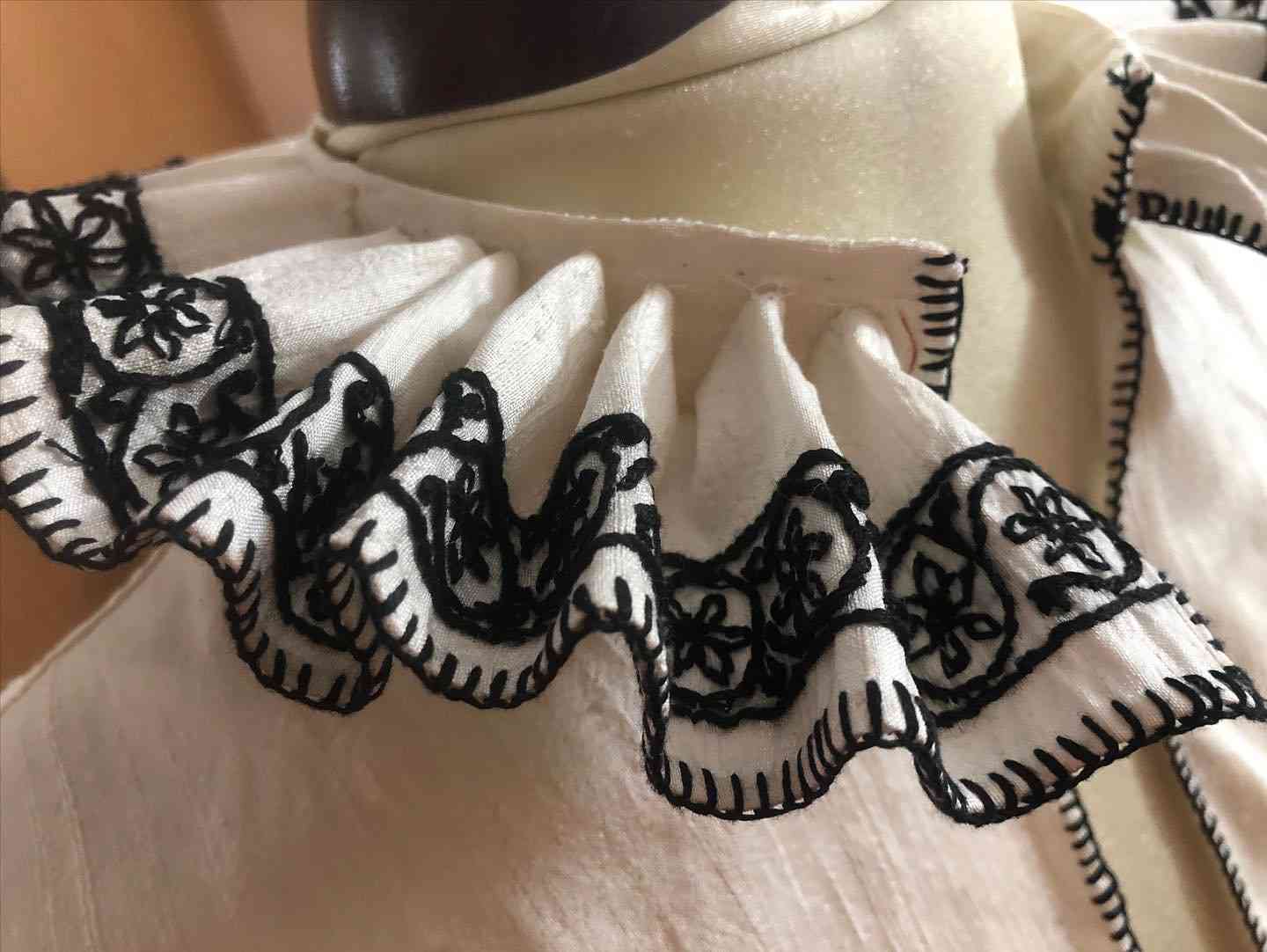 and have added a blackwork trimmed ruff 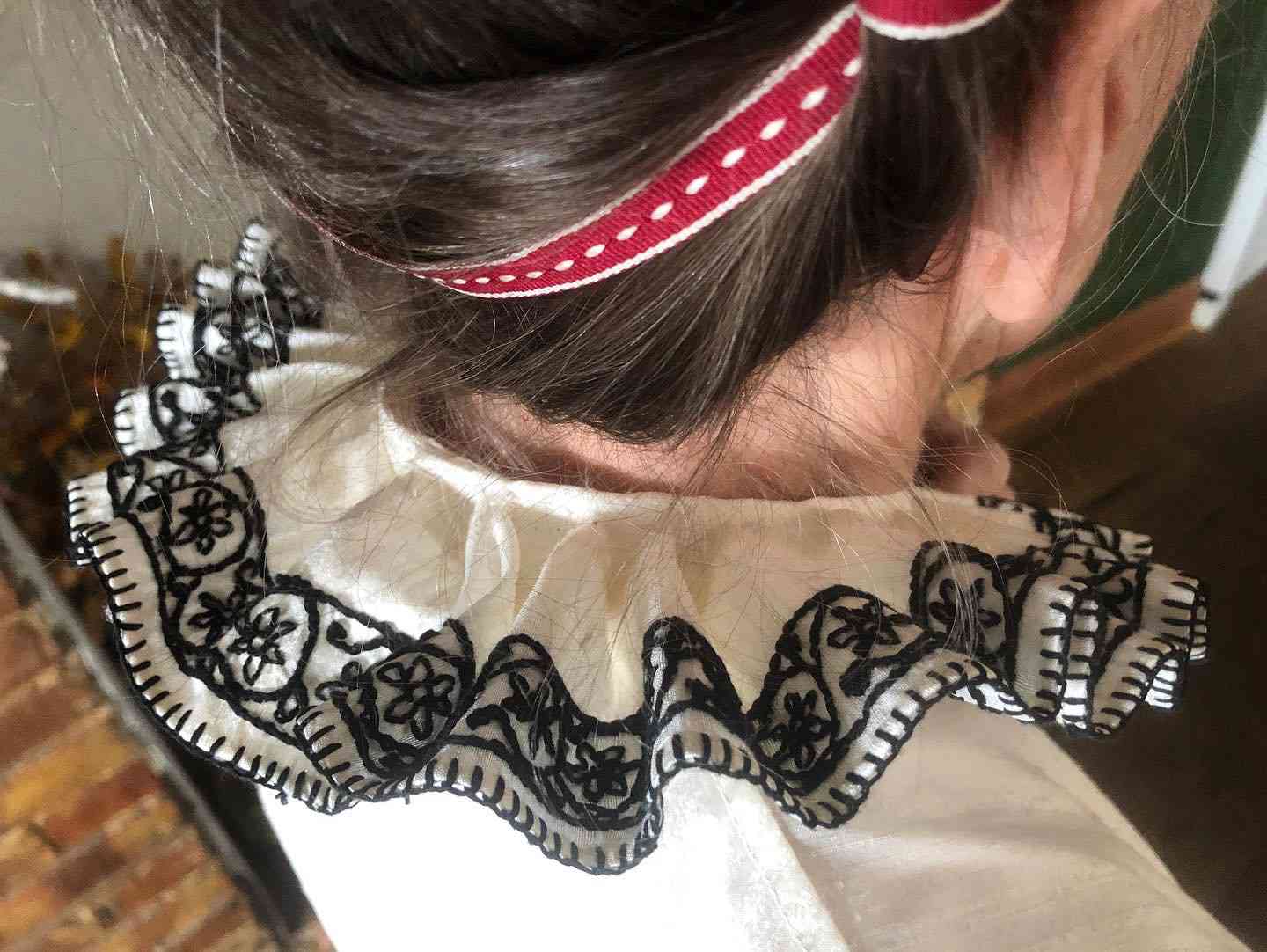 - just a litle more embroidery and I’ll be able to try it out.